Stonelow School was built in 1967. It is a modern building, pleasantly situated in its own grounds, which include a landscaped area at the front, a large flat playground with markings for basketball, netball and games, a sizable school playing field, and a collection of native British trees. There is a tyre park, trim trail, willow tunnel, climbing wall and outdoor stage for children to play on. A range of habitats have been developed including a vegetable garden with raised beds, soft fruit beds, a butterfly garden, bug hotel,pond and meadow.

The refurbished building contains an administration area with offices, a large multi purpose hall, eight classrooms, a small kitchen for use by children and the school meals kitchen. At present, five rooms are used for class teaching and all have a shared art area, toilets and water fountains outside. Classrooms are fully carpeted and equipped with interactive whiteboards. Other rooms include: a large library/nurture room, an air conditioned computer suite and a room for parent meetings and group work. 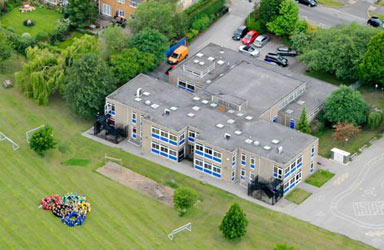